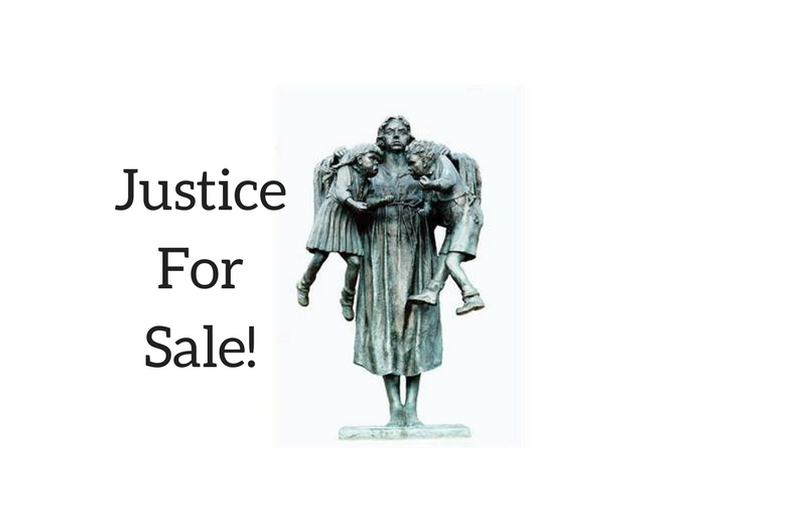 A two-metre high artist’s proof of the famous Scales of Justice sculpture outside Teesside Combined Court is up for sale at auction – with an estimated price tag of £25,000.

Made from fibreglass and wood, the statue is the model that artist Graham Ibbeson used to create the much talked about statue.

Erected on a concrete plinth directly outside the main entrance to the court when it opened in 1991, the bronze original shows two battling street kids being held aloft by Lady Justice.

“This is the original artist proof, that was moulded and cast into bronze,” says Ibbeson, explaining the story behind the sculpture for the auction particulars.

“It was unveiled outside Middlesbrough Crown Courts in 1990. The female figure  – a portrait of my wife – is neutral and unbiased, a neo-classical mother holding apart two squabbling siblings. It could almost be me and my sister scrapping in the 1950s!”

The commission was reported to have cost £15,000 and was one of three Ibbeson statues in the town at the time. In 2011 vandals covered the statue with red paint and anti-police graffiti.

Many of the South Yorkshire artist’s most famous works are statues of celebrities in the towns of their birth.

These include Eric Morecambe which was unveiled by the Queen in the comic’s eponymous hometown in Lancashire, Cary Grant in Bristol and Lauren and Hardy in Stan Laurel’s birthplace, Ulverston, Cumbria.

Plans are also underway for an Ibbeson statue of Benny Hill in TV comedian’s hometown, Southampton.

However, plans are underway for the town’s first statue with a female subject, thanks to the Eighth Plinth campaign.

The Scales of Justice proof will be up for auction at Farnon & Lake in Aynho, Oxfordshire on Thursday October 5 with an opening bid of £15,000 being asked for.

All lots are sold with a 15% buyers premium and the auctioneers say they can ship the item worldwide.